Adobe Suite can be called a synonym to Graphic design. Adobe suite has everything that you need to become a full-fledged graphic designer.

Photoshop is one of those elements that has been owned by Adobe and has made work a lot easy for digital designers and studios. Even if you are a social media influencer or a just a normal photo freak guy, Photoshop has a lot to offer you.

The photoshop you see today wasn’t supposed to be like this. It has come a long way and has been through many changes from time to time. Photoshop was launched in 1982 by John Warnock and Charles Geschke.

It was not developed by adobe but bought by adobe. Just started as a Black and White image opener, Adobe Photoshop is now king of all Photo editors and color editing softwares.

Today I have come up with some adobe photoshop facts and stats that will surely amaze and you will really find them interesting. Let’s Begin:-

1. Old Name Of Photoshop was Display

What if I tell you that photoshop was not named photoshop in its beginner days. As its task was just to show images only. It used to display grayscale images on a black and white display So its Old name was Display. With the several Upgrades, the name also changed.

Yes! You heard it right. It wasn’t developed by Adobe. It was bought by Adobe just after 2 years of its release. At that time it cost adobe around $300 only. Not that easy, It was considered a handsome amount back then. Adobe bought it to expand its designing progs.

Thomas Knoll who developed this software didn’t intend to make this as an Image editing utility until he introduced his brother John knoll to this software. Then they both worked hard to make it an image editing tool.

Do You wanna know which image was first photoshopped on photoshop?

It was creator Thomas Knoll’s wife’s photo which was first photoshopped on photoshop. The photo was Creators wife on the beach. The photo is often known as Jeniffer In Paradise. Here is the photo. Have a look. 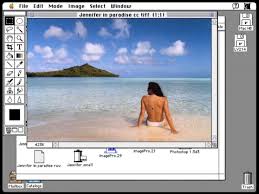 You are thinking that Photoshop is Old software. Yes! You are right but this utility older than you are thinking. This application is more than 32 years older and is still leading its field. Thanks to adobe for that.

6. Photoshop Was Written In Pascal

Unlike other traditional languages, the very first version of Photoshop was written In Pascal language for Macintosh Os.

Well, guys Photoshop being the name of an application is also a Verb. Like the task to edit an image using photoshop means to photoshop the image.

Let me explain to you by example: Go and Photoshop this image.

The Computer History Museum has now made the source of the first version of Photoshop totally accessible for the public. It can be downloaded from computer history. Photoshop is just gaining more and more respect day by day.

Photoshop can now be used in more than 24 main languages all over the world. This shows the popularity of the photoshop all round the globe. you just have to select your version of the language.

10. First Version For MACs Only

Adobe bought pre-developed Photoshop in 1989 and released its official Versio 1.0 in 1990. This version could run on MAC operating systems only.

Photoshop has been through many Ups and Downs in its earlier stages. It was very first marketed by BarneyScanXP as its integral desktop scanner then. So it was also called BarneyScanXP.

In 2007 adobe released new software, Lightroom, which was meant for helping professional photographers in Post image production.  You can also download its android version from here.

Photoshop Express is an android app that is launched by Adobe taking care of photo freak teens. It has a lot of filters and adjustments that will surely give you a flexible touch in editing. You can download it from here. It has a paid version too but the free version also has a lot of features.

In the year 2019, the revenue of the adobe was touching heights with a whopping amount of $2.99 billion. Photoshop had a major contribution to this sum.

Adobe has a huge stock of 500,000 premium images and more than 5 million videos. And every day millions of images are edited using photoshop.

Some Fun Stats Regarding Editing On Photoshop

These facts are funny and I have collected them from the Internet only.

Why Is Photoshop Better Than Its Competitors?

The flexibility and amount of features provided by Adobe are very high. So users prefer only and only Photoshop when it comes to photo editing.

I am not overconfident while saying this stuff. I personally have used many editing tools and found this all other software are not competitors of photoshop. They are just editors and photoshop has a lot to offer.

Guys, I don’t think That there is any other tool better than photoshop when it comes to photo editing. The top-notch organization of photo art tools cannot be found anywhere else. These were some facts and stats from history and the current scenario of photoshop.

I hope you gained some knowledge of reading them. If you are dubious of any of the facts written above you can openly tell me in the comments section. I will surely clear you. And stay tuned with me I am really going to post photoshop hacks in the coming days.

previousHow to fix the “iPhone Not Backed Up” Problem?
nextBest Softwares For Bridge Designing In 2021
Do NOT follow this link or you will be banned from the site!